You are viewing an old version of this page. View the current version.

SubGit is a tool for bidirectional Subversion and Git repositories synchronization. SubGit is written in Java.

Most commonly, SubGit user starts with Subversion repository being configured on the server. Access to Subversion repository is available over network (with HTTP(s), plain svn or svn over SSH protocols) and over the local file system. Correspondingly, users requests are handled by Apache Web Server, svnserve daemon or sshd daemon which invokes svnserve process. Figure 1.1 shows a generic outline of the described configuration.

Optionally, user may enable revision properties on Subversion side by enabling pre-revprop-change hook in Subversion repository - this will let SubGit use single Subversion user account, but this modification is not required, so even Subversion repositories that you do not have shell access to could be mirrored with SubGit. Figure 1.2 shows typical SubGit set up that allows one to use both Subversion and Git and smoothes migration path.

During mirror initialization stage, SubGit translates existing Subversion revisions into a newly created Git repository. There is also a way to skip mirroring and only use SubGit for one-time import from Subversion to Git. 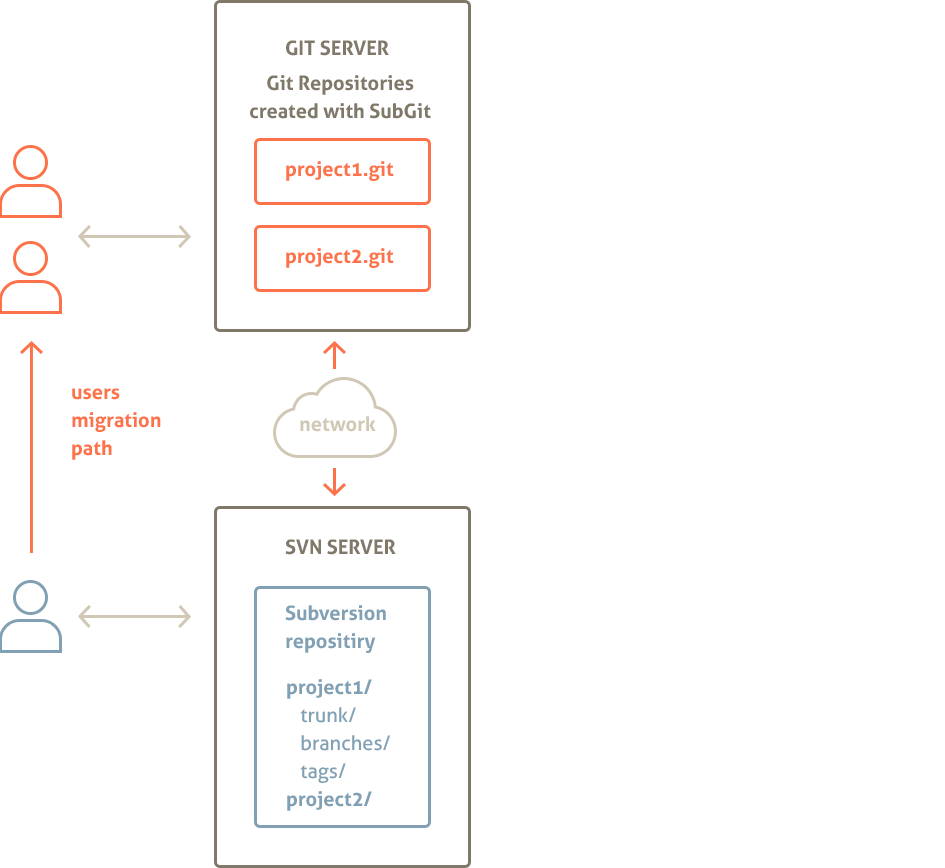 Above mappings are static and configured within Git repository once before translation and synchronization is started. All mappings and other information is stored in configuration files located in the GIT_REPOS/subgit directory. Following sections describe these mappings in more details.

Note:
Subversion is a very powerful system and sets mostly no limits on the repository and project layout. Hence, it may not be always possible to define necessary mappings for any project stored in Subversion repository found out there in the wild. Such unmappable projects would not be handled by SubGit. However, for the most of the Subversion repositories in production use, mappings could be defined and, in most cases, they are detected automatically by SubGit.

It is not necessary for trunk, branches and tags folders to have these exact names, but the roles of these folders are important. Each project could be mapped to a bare Git repository as shown in Figure 3.1 and Figure 3.2 along with the corresponding parts of SubGit configuration file. 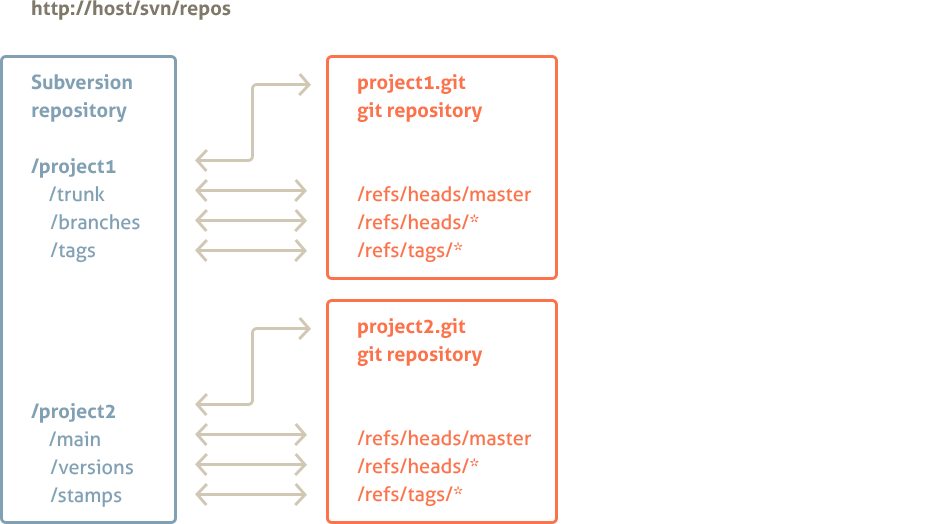 For each project mapped to a Git repository, branches and tags are mapped to the corresponding references in the Git repository. SubGit distinguishes the following folders in Subversion project as branches or tags:

Each folder is mapped to the reference (branch or tag) in the Git repository. For trunk folder the mapping is one-to-one as there could be only one trunk folder (as well as only one master reference in Git) and for other folders wildcard mapping is used. Default mapping and corresponding SubGit configuration file part is shown in Figure 3.3 and Figure 3.4.

Whenever project uses standard folder names (i.e. trunk, branches and tags), SubGit would automatically detect and configure mapping for that project. Otherwise configuration would have to be manually adjusted to include proper paths and references names. 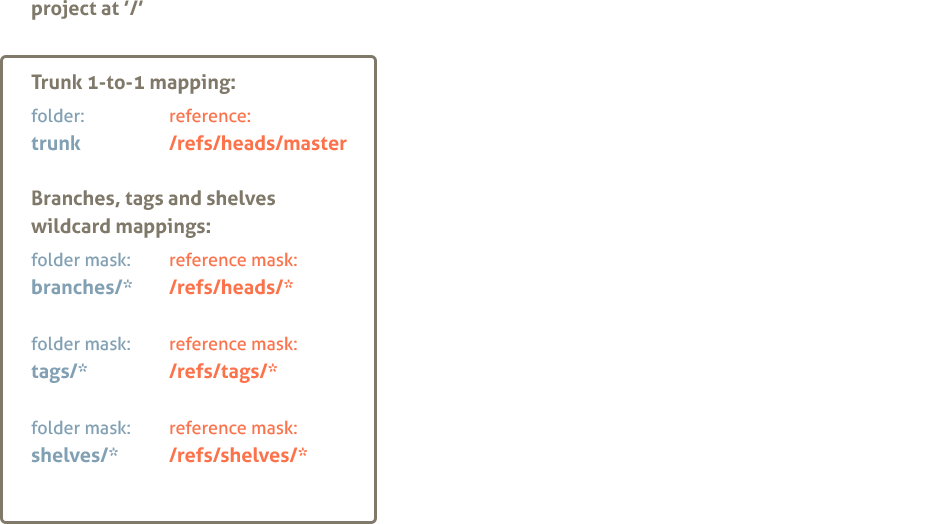 By default there is no explicit authors mapping and the following rules are used for translation:

Additionally to the default rule, explicit authors mapping may be provided by SubGit configuration. Authors mapping is stored in a separate text file which is looked at GIT_REPOS/subgit/authors.txt by default. Mapping file is read in system default encoding.

Default authors.txt location may be changed in SubGit configuration file.